Exhibition at the gallery O&O DEPOT

Germany's first solo exhibition of works by Syd Mead, the visionary of utopian film worlds and futuristic designs, will be on view at the O&O Depot Gallery from 14 November 2019. Since the 1970s, Syd Mead, who created groundbreaking designs for companies such as Ford, Chrysler, Philips Electronics and Sony, has worked for Hollywood. For legendary science fiction films, he created trend-setting and breathtaking worlds that continue to influence film, industrial and game designers as well as architects and urban planners to this day.

When O&O Baukunst won the competition for the Urbane Mitte Am Gleisdreieck in Berlin against international competition, it was clear to the project architect Markus Penell (O&O Baukunst) that he wanted to make inspiring concepts of visionary urban development tangible beyond architectural means. The idea arose to win Syd Mead, one of the most important visionaries for the city of the future, for an exclusive presentation of his works in Berlin. In cooperation with entrepreneur Marc F. Kimmich (COPRO) and curator Boris Hars-Tschachotin, O&O Baukunst was able to realize a representative exhibition entitled SYD MEAD - FUTURE CITIES.

Syd Mead
Star Trek: The Motion Picture, Tron, Blade Runner or Aliens, Mission to Mars and Elysium belong to Syd Mead's best-known productions, for which he developed entire cities and mobility concepts with flying cars, autonomous vehicles, space ships. His visions continue to shape the popular image of the future to this day. In his designs he has foreseen many technical achievements that have become reality or are about to become reality.Syd Meads picture worlds are always characterized by functionality and mostly a positive idea of the future. But for the dystopian cult film Blade Runner, Syd Mead created the vision of a boldand apocalyptic city in which huge skyscrapers dominate the skyline. Now, in November 2019, fiction overlaps with the present, for the 1982 film is set in Los Angeles 2019.

The Exhibition
In the exhibition SYD MEAD - FUTURE CITIES, O&O Depot brings together a selection of his iconic drawings and gouaches with a focus on urban spaces, including motifs for Blade Runner. A total of 33 originals invite an exclusive look into the creative world of Syd Mead. Furthermore, Syd Mead talks about his works, his inspiration and his career in a brand-new short documentary film.

O&O Depot / O&O Baukunst
It is consistent that the works of Syd Mead have found a temporary home in the gallery of the architecture firm O&O Baukunst. Syd Mead's futuristic urban worlds have always been designed under the premise of the technically imaginable. O&O Baukunst also feels connected to this visionary aesthetic coupled with what is feasible. With its beginnings in the artist group Haus- Rucker-Co, which caused a sensation with works such as Oase Nr° 7 (documenta 5, Kassel 1972) and designed utopian architectural concepts, O&O Baukunst continues to pursue forward-looking visionary urban planning today. Their conceptually artistic approach combines futuristic echoes with the demands of today's urban planning. This is currently also illustrated by the project Urbane Mitte Am Gleisdreieck in Berlin, won by O&O Baukunst.

The Curator
The exhibition concept was designed by Boris Hars-Tschachotin, an expert in film production design, who has already curated the large Ken Adam retrospective for the Kinemathek. He is the author of the book Der Bildbau im Film: Metropolis, Dr. Strangelove und Troy, on the significance of production design for film. As a director he has made a name for himself with award-winning films such as Sergej in der Urne or Lurch. 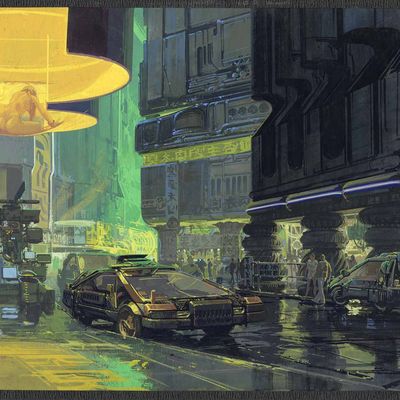