Now it's official: The Senate Department for Urban Development, Construction and Housing submits test report on the Urban Mitte and confirms:

1. From the point of view of urban development policy, the concept of the Urban Mitte as well as the present draft land-use plan together with the urban development contract meet the current climate policy tasks and the local needs.

2. There is no need to amend the land use plan or the urban development framework agreement Gleisdreieck.

The full press release from the Senate Administration here: bit.ly/3IkeoA4

DLE and COPRO see this official review report as a confirmation of the previous planning principles and thank the Senate Department for Urban Development, Construction and Housing for this professionally comprehensive and conclusive review. This also confirms the vote of the public from the workshop process that began in 2014, which aimed to achieve a broad consensus of experts and citizens at an early stage. The results of this early participation process formed the basis for the subsequent international urban planning/architectural competition, which was won by the Berlin office Ortner & Ortner Baukunst. The numerous political majority votes in the Friedrichshain-Kreuzberg district in favor of the building project are also confirmed by the present audit report of the Senate Department for Urban Development, Building and Housing. 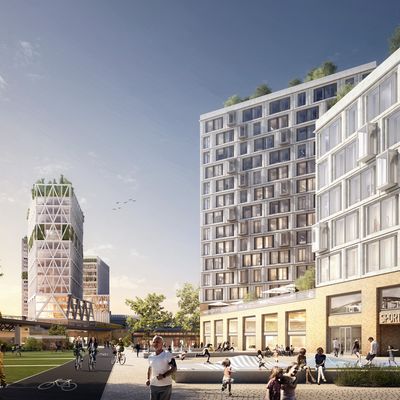