C/O Berlin is presenting the exhibition Felicity Hammond: Remains in Development in its spaces in Amerika Haus from September 12, 2020 – January 23, 2021. In her first exhibition in Germany, Felicity Hammond brings together three recent groups of work in a newly developed, site­specific installation. Remains in Development merges large­format collages, sculptural ele­ments, and an installation that examines the chromakey process em­ployed in film and photography, using green and blue backgrounds to dig­itally separate objects from their surroundings and place them against new backdrops.

In addition and parallel to the presentation at C/O, an outdoor project consisting of five temporary columns was realized, which extends the exhibition into the urban space. The motifs were designed especially for the presentation and are based on collages by the artist, which are shown in the exhibition at C/O. Three of the five columns are exhibited in the outdoor area of the B-Part Am Gleisdreieck and can be viewed free of charge in their unique interplay with the urban landscape. The other locations of the columns are the central reservation on Hardenbergstraße near C/O and the Kühlhaus Berlin.

In her work, Felicity Hammond (b. 1988 in Birmingham, UK) confronts the social, political, and economic contradictions of the postmodern city, whose buildings and façades shape our collective identity and open up a future by obliterating the past. Hammond’s large­scale collages combine found images from glossy real estate brochures and billboards with her own photographs. Advertis­ing’s bold promises meet postindustrial mise­en­scènes formed of car tires, construction debris, bags of plaster, wooden pallets, and abandoned materials from large­scale construction sites. Her collages are reminis­cent of apocalyptic historic images, but they never reveal the locations of the places they show or how they relate.

We are very happy about this exciting cooperation! The exhibition and the columns on the B-Part site can be visited until January 2021. 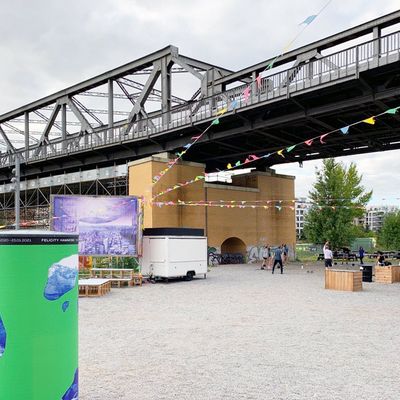